I enjoyed Paperbacks from Hell: The Twisted History of ‘70s and ‘80s Horror Fiction, Grady Hendrix’s romp through the post-Stephen King boom in horror publishing. I’m consumed quite a bit of horror from this era and I still found quite a few books–bizarre, deranged, amazing books– that I want to read. 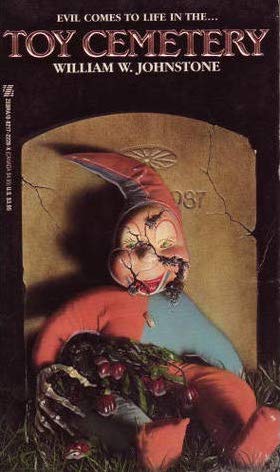 Toy Cemetery (1987) achieves maximum Johnstone. Vietnam vet Jay Clute returns to Victory, Missouri, where he grew up, with nine-year-old daughter Kelly in tow. Within hours of his arrival, Jay discovers that the two major local landmarks are (1) an enormous doll factory in the center of town run by an obese pedophile named Bruno Dixon, who films satanic kiddie porn in it, and (2) a high-security hospital/mental institution/underground research facility that houses the “products of incest,” enormous man-monsters with apple-sized heads and superhuman strength. Tiny toys run amok, as does incest. Jay and his daughter almost hook up their first night, only to snap out of it when the crosses they’re wearing clink together.

Reading this book is like driving through a dust storm while in a post-concussion haze: the harder you try to focus, the more everything slips away into an insanity vortex. A supermarket check-out girl’s head explodes, but no one seems to mind. Possessed teenage boys follow Kelly through town, waggling their inappropriate boners until she fights them with karate and kills one with an ax. Everyone has a secret doll collection. A tiny French general leads a toy army.

Johnstone piles incident on incident, trope on trope, and if something isn’t working he keeps on piling. When time itself needs to be brought to a screeching halt, Jay Clute just pulls out his gun and shoots a clock. Because clocks make time, right? In William W. Johnstone’s world, why not?

Who could possibly resist?

Partway through painful progress on Quantum Mechanics and Path Integrals by Richard Feynman and Albert Hibbs. At one time, this would have been light reading for me… in any case, this is a much deeper dive into the basic concepts outlined in Volume 3 of the Feynman Lectures at a math level that’s challenging but not impenetrable. Feynman basically disassembled the foundations of quantum theory and recast it in a novel approach to least-action and uses this method to attack the classical problems in quantum theory (e.g., harmonic oscillators, many-body, perturbation theory) in literally a more dynamic fashion than the basic Heisenberg/Schroedinger/Dirac approaches I was taught.

I’ve been reading more escapist books. This month it’s been the Ruth Galloway series by Elly Griffiths. Ruth is a forensic archaeologist in Norfolk, England, who is sometimes brought in by the local police to lend her expertise when bones crop up in various places and situations. One of her best friends is a practicing Druid. Good, light reading.

I haven’t read a damn thing worth a damn this month. Limitless Lands is probably the best of a bad bunch on Kindle Unlimited. I’m coming out of the closet, I’m kind of a Lit-RPG fan. Anyhow, I like the character and the writing of this one. A little military worshipful for me, and the character somehow joins a faction that is basically the Roman Empire if it had outlawed slavery and other brutal practices.

The Vine Witch by Luanne G. Smith. A light read, pretty perfect for a flight and killing time while I can’t sleep on CET. Some of the plots go unresolved, but nothing too egregious.

I feel like I’ve graduated. This morning, I read the back of an oatmeal box. Did you know that Quakers had buckles on their shoes?

Welcome to Friday! I've been engaged in some desultory cleanup of both my office and my work -- trying to…

[caption id="attachment_51199" align="alignright" width="191"] What a hell of a match this guy had.[/caption] Liverpool pounded Leicester and has the league…