Thirty-Something Rifle Cartridges I:  The 33s

I find the thirty-threes to be some of the most useful of the thirty-something calibers for the North American game fields.  Most of them are easily capable of taking the largest American big game.  There is a wealth of projectiles available.  Some of them, like Winchester’s excellent .338 Winchester Magnum, have been around for decades, and as a result there is a great deal of loading data available.

As a result, there are a lot of .33 caliber rounds out there to discuss.  So, without further ado…

At the End of the Black-Powder Era… 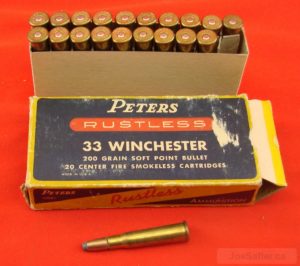 As we saw back in the series on level guns, the famous John Browning/Winchester collaboration started with a big, tough lever gun called the Model 1886, which could handle some pretty heavy cartridges.  In 1902 Winchester made this rifle available for a new cartridge, the first commercially available thirty-three, the smokeless-powder .33 WCF.

This was a pretty hot load for its time, launching a 200-grain cast bullet at 2,200 fps.  With more modern, jacketed bullets, it quickly gained a reputation as a hard hitter, ideal for deer, elk and bear at ranges out to about 200 yards.  Besides the Model 1886 Winchester, it was also available in the 1885 single-shot and the lever-action 1895 Marlin.

The .33 WCF was interesting because it came at a transitional moment in American shooting.  As we’ve noted previously, the end of the Great War resulted in a lot of American shooters and hunters returning home with the memory of their issue 1903 Springfield and Pattern 17 Enfield bolt guns in mind, along with the powerful .30-06 round they fired.  The lever gun was due to lose some popularity; the age of the bolt gun was dawning.

And the .33 WCF, while a groundbreaking round, was a rimmed lever-gun cartridge.

The .33 WCF was offered in the Model 1886 until 1935, when Winchester replaced the 1886 with the beefier Model 71 and its .348 Winchester cartridge.  But this first of the thirty-threes had set the stage for some modern bolt-gun rounds to come, and one of those pioneering bolt-gun rounds came (in part) from the mind of someone we’ve discussed before:  Elmer Keith.

Early in the 20th century Elmer Keith, along with his colleagues Charles O’Neil and Don Hopkins, developed a new .33 wildcat based on the .30-06 case necked up.  The .333 OKH was intended to use the same .333 diameter bullets as the .333 Jeffries then popular in Britain, and while it delivered some good performance it was hampered by the lack of bullets, and since wildcatters live and die by the availability of suitable projectiles, this didn’t bode well for the .333.  The logical evolution was to increase the bullet size to .338, resulting in the .338-06 wildcat.

This same trio also developed the .334 OKH, based on the .375 H&H case; this ended up being remarkably similar to the .340 Weatherby Magnum, about which we’ll talk in a moment. 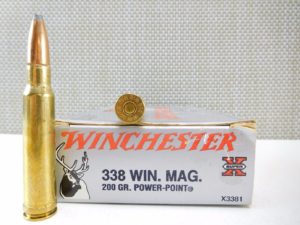 In fact, the tale of the mid-twentieth century thirty-threes is somewhat convoluted, with plenty of wildcats and experiments mixed into the developments by major gun and ammo manufacturers.  But one thing very quickly became apparent – launching a big, heavy projectile at significant velocity called for a magnum-sized case.

Precedent was already in place.  During WW2 Roy Weatherby had introduced three standard (2 ½”) length cartridges based on the .375 H&H belted case, shortened and necked down.  These three were the .257, .270 and 7mm Weatherby magnums, and they soon gained a following among those fond of high-velocity rounds.

In 1958, at the urging of Elmer Keith, Winchester took that precedent and applied it to Keith’s and others work with the medium bores.  They followed Weatherby’s example, took the .375 H&H case, shortened it to fit standard-length actions, straightened the case walls a tad and necked it down to take a .338 pill.

Now the American sportsman had a real world-beater.  The big new medium-bore magnum put out a 225-grain projectile at 2,800 fps in factory loadings, and with the right slug would easily handle any North American big game, including big Alaskan grizzlies and moose. 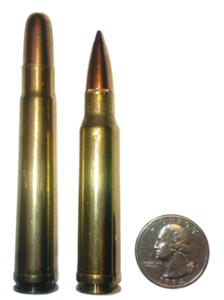 It should come as no surprise to anyone that’s been paying attention that this round is a favorite of mine.  My .338, Thunder Speaker, is built on a 1908 DWM large-ring Mauser action with a Douglas barrel and a Bell & Carlson stock.  The .338, while delivering plenty of punch, does it on both ends, having a reputation for recoil as well as hitting power.  Thunder Speaker, in addition to the big, wide recoil pad on that B&C stock, is Mag-Na-Ported and weighs almost ten pounds loaded, which makes it very manageable – at least for me.  I’m large and not recoil-sensitive, so your mileage may vary.

My favorite load in that big, tough Mauser action is a 225-grain Barnes TTSX boat-tail over 67 grains of IMR 4350.  This gives me about 2,800 fps for almost two tons of muzzle energy.  This load will easily lengthwise an elk or moose, and that’s what Winchester intended the round should be able to do, so I’m pretty satisfied; in Thunder Speaker, with me at the wheel, it will also put three rounds into a 3” circle at 200 yards.  The best shot I’ve ever made on a game animal was with this rifle; a fat meat mulie buck in the open sage country south of Parshall, Colorado.  The buck paused to look back on the edge of an arroyo; I tossed my cap on a flat rock, laid down in the snow, laid my rifle on the rock, took aim and sent one round down the hill.  The .338 slug hit the mulie at the base of the neck, dropping him in his tracks at 280 yards.

She still does kick, though.  My son-in-law once got a case of Kaibab eye after asking to try out Thunder Speaker off the bench-rest; I warned him not to choke up on the scope!

The .338 Winchester Magnum was quickly a big commercial success.  In addition to its introductory chambering in another shooting legend, the pre-64 Winchester Model 70, it was quickly picked up in the Remington and eventually, the Ruger, Savage and many other lines.  Browning made it available in the BAR, making it the most powerful semi-auto rifle available at the time.  Wildcatters quickly picked up on the usefulness of the case, bringing about among other things the .30-338 Magnum, which Winchester later legitimized as the .300 Winchester Magnum – bringing the standard-length magnum case back to America’s caliber.

But the competition was paying attention. 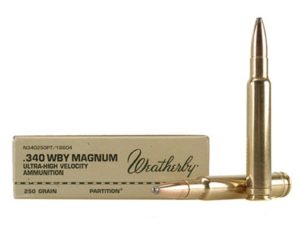 Only four years after Winchester brought out their thirty-three, Roy Weatherby upped the ante.  His entry into the field was the .340 Weatherby Magnum, on the same magnum-length case as the .378 Weatherby Magnum.  This was a real whopper, sending the same .338 225-grain slug forth at 3,100 fps.  But the .340 Weatherby suffered from the same issues as the 8mm Remington Magnum we discussed in the last installment:  It was limited to a magnum-length action.  What’s more, it was a proprietary round.  When the .340- Weatherby was introduced one could only have one in the Weatherby Mark V, with factory ammo initially only available from Weatherby.  Even today, the only company loading this round besides Weatherby is A-Square, and the ammo is pricey.

The place of the thirty-three in the American shooting scene was now secure.  But the explosion of rounds to come was to prove an embarrassment of riches.

In the magnum world, the .338 Winchester Magnum and the .340 Weatherby Magnum have been joined by some new contenders.  The .338 Ruger Compact Magnum came out in 2008, a 2,700fps thumper intended to be chambered in short-action rifles like the M77 Mk II Compact. 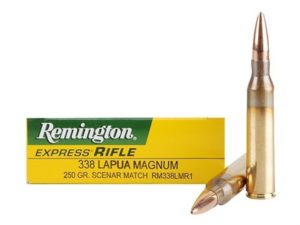 There are a couple of newer Weatherby-level steamrollers available as well.  In 1989, A Norwegian/Finnish munitions company named NAMMO (Nordic Ammunition Company) saw a market for a powerful, long-range military sniper round; their answer was the .338 Lapua, which was adopted in civilian as well as military applications.  The Lapua is a real rocker, sending out a 250-grain slug at over 3,000 fps.

In 2002 Remington responded with an expansion of their Ultra Magnum line, the .338 RUM (Remington Ultra Mag.)  This fell a bit short of the .338 Lapua and produces very similar ballistics.

But both ultra-mag rounds have the same shortcomings:  They both require magnum-length actions, and they both run at very high pressures, resulting in significant barrel wear at a much lower round count than the older .338s.  Still, there’s still news in the non-magnum world.

2006 saw the introduction of the .338 Federal, which was simply the .308 Winchester case necked up to the .338.  This introduction not only gave .33-caliber thumping to short-action bolt guns, but it also added a medium-bore alternative to the AR-10 platform that was becoming popular as the Tacticool craze accelerated.  The Federal round yielded only modest performance compared to the magnums, propelling a 210-grain slug at about 2,600 fps.  But the use of the .308 case made for a versatile round that punches well above its weight class. 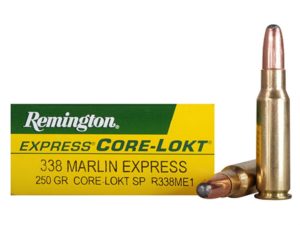 Finally, in 2009, Marlin brought the thirty-threes full circle by introducing the .338 Marlin Express, a semi-rimmed lever-gun round intended to punch up the power level of that company’s 336-series rifles well above the original .30WCF level.  In fact, at ranges up to about 200-250 yards, the Marlin Express round delivers performance in excess of most .30-06 loads, which makes the 336 rifles far more versatile on bigger, thicker-skinned game – and brings the lever-gun world back to the levels of punch known in the original 1886 Winchester.

The thirty-threes are many, powerful and versatile. The late 20th-early 21st century proliferation of .338-caliber rounds has been interesting, but none of them have quite managed to knock the good old .338 Winchester Magnum off the top of the heap.

In the next installment, we’ll examine a group of rifle cartridges that are a little lighter on the long-range magnum loudenboomers and a little heavier on the short-range woods rounds – so stay tuned for an in-depth look at the thirty-fives.

Haha, just kidding, its the usual mailed-in links, but I wanted everyone to feel excited about the last Monday of…

[caption id="attachment_51325" align="alignright" width="159"] Dawg Pounded[/caption] Well the year is all but over.  And it isn't ending well for Freddie…